Introduction to the IUE collection

The archives of the International Union of Electronic, Electrical, Salaried, Machine & Furniture Workers, AFL-CIO (IUE) constitutes one of the most significant and comprehensive labor history collections existing anywhere in the United States. Containing over 1,500 cubic feet of textual records and non-textual material (audio tapes, films, photographs, and labor ephemera), the IUE archives serves as the cornerstone for the Rutgers University Libraries' labor history collections and has enhanced the university's status as a nationally recognized center for the study of labor and social history and labor-management relations issues. Initiated in 1992 with funding provided by the IUE and the National Historical and Publications Commission, the IUE Labor Archives Project entails the arrangement, description, preservation of the union's voluminous records, and the dissemination of information to facilitate scholarly accessibility to the collection. The project represents the culmination of Rutgers' historic relationship with the IUE, originating in summer labor education institutes held in the 1950s and formalized in 1965 when the union designated the University Library as the official repository for its historical records. 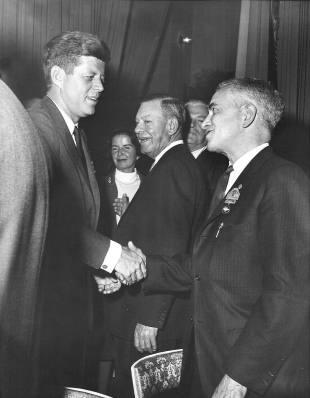 Chartered as a Congress of Industrial Organizations (CIO) affiliated international union in 1949 after a split with its predecessor organization, the suspected communist-dominated United Electrical Workers (UE), the IUE evolved into one of the most influential trade unions in the world in terms of membership (400,000 plus) and in its legacy to the modern labor movement and society. Dating from 1949 through the early 2000s, the archives document the full range and scope of IUE institutional activities and contain historical records highlighting intensive organizing campaigns, strikes, negotiations and collective bargaining, contracts and wage agreements, district, local, and national elections, litigation, legislative, political, and social action programs, international labor affairs, and research and educational activities. The papers of four IUE presidents, James B. Carey (1949 - 1965), Paul Jennings (1965 - 1976), David J. Fitzmaurice (1976 - 1982) and William H. Bywater (1982 - 1996), and records generated by the union's other officers, including those of Secretary-Treasurer Ed Fire, who would become the IUE president in 1996 and who oversaw the merger with the Communications Workers of America (CWA) are also included and compose the bulk of the archives. Records from IUE Districts One and Districts Three are also part of the collection.

Among the unique aspects of the IUE Labor Archives are the diversity of records contained within the collection and the interdisciplinary nature of the subject areas represented. The IUE Labor Archives expands upon the historical record of the union's parochial organizing and bread-and- butter interests to document a broad range of complex, social, political, and economic issues intrinsic to the evolution and emergence of modern North American society from World War II to the present. The union's contributions to domestic politics, promotion of progressive public policy and social welfare issues, and the evolution of the modern corporate and national security state are amply documented. Because of the remarkable range and scope of the IUE's institutional activities and the union's historic role in the vanguard of progressive social causes, the archives have drawn visiting scholars from such diverse fields as history, sociology, women's studies, industrial relations, economics, political science, economics, science, and technology.

"A Union's Work Is Never Done:" A History of IUE District Council Three
By John Terry, Public History Intern, for Special Collections and University Archives and the IUE Labor Archives Project, Spring 2007. John Terry focuses on the history of District Council Three from the time of its merger with District Four in 1963 until its absorption into CWA District One in 2003 after the merger of the IUE and the Communications Workers of America.
Transcript: interview with former District Three President Sal Ingrassia
Transcript of the December 14, 2005 interview with Sal Ingrassia (1984-2003), former District 3 President, who joined the IUE in 1953 while working at Sperry Gyroscope Company in Long Island. Prior to becoming District President, Sal served as Director of Organizing, Vice President, and Secretary-Treasurer of the District.